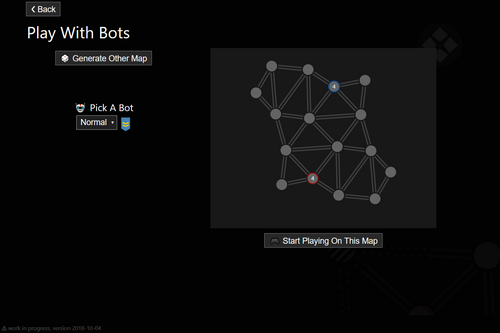 The October release of DRTS is now live, you can play the game here on itch.io

Feedback on earlier versions showed that new players often had a hard time beating the bot at first. To fix this, I introduced easier levels of difficulty. These support a gradual progression to more challenging opponents.

When playing with a bot, you can now pick a difficulty level before starting the game. To make this as simple as possible, the game automatically recommends a bot based on the results of previous games. After finishing a game, the difficulty level is displayed again to put the result into context.

This release also fixes an issue discovered by Hugo in December: The game now displays traces of defeated units for a while, to clarify where those units went, even when you were focused on another part of the map at the time the unit was defeated.

Many thanks to all the people who helped to test and make this a solid release!