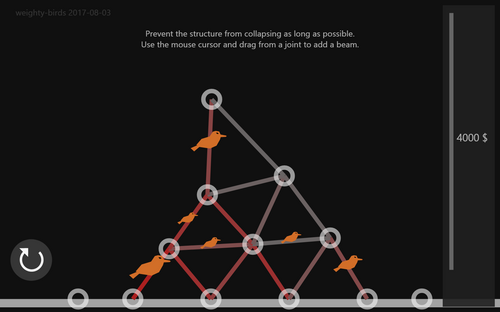 2017-08-03 is the first published version of the Weighty Birds Videogame.

You can play the game at https://distilledgames.itch.io/weightybirds

The development will progress further and updates are going to be published on the site linked above.

Based on your feedback, I worked on fixing what was found to be distracting or confusing in the user interface.

Following are the major changes implemented since june:

The adversaries are now depicted as birds. Primary motivation for this change was to ensure recognition as external influence rather than indication of state of the building.

Display of Resources and Expenses

The display of available resources has been found to attract the players attention at the wrong times. It was changed to avoid the frequent visual changes early in the game, since then this information is not yet of much use.

Display of expenses when building a beam has been improved for better visibility.

​Prevent the structure from collapsing as long as possible.